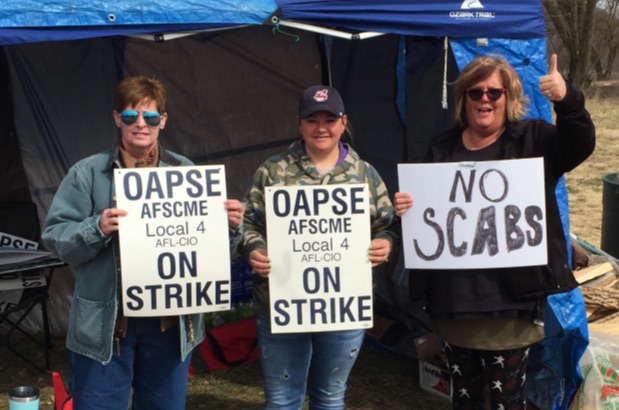 Striking members of OAPSE Local 390 at Claymont City Schools are headed back to work after spring break. Union members voted 2-1 to approve a contract. The Claymont School Board also voted to approve the new agreement.

Local 390 extends its sincere appreciation to all the OAPSE members who joined them at the picket sites; at the march and rally; and in solidarity with the donations of wood, straw, food and money, all of which really helped during their month away from work and paychecks.  A BIG THANKS to all the members, locals and districts who stood with Local 390 and helped them win a new contract and return to work.

Hundreds of Local 390 members, teachers, and community supporters marched and rallied in the streets of Uhrichsville and Dennison to demand fairness, dignity and respect from the administration of Claymont City Schools. They urged the school board and administration to come back to the bargaining table and negotiate a fair contract. Local 390 members were joined on stage by elected officials, union leaders and clergy, all of whom called on management to start talking again with union leadership so an agreement can be reached. The members of Local 390 have gone two years without a contract, and they just want to get back to the kids they love.

See below for videos on the strike and of the rally and march.

Click here for coverage of the march and rally in the local newspaper.

OAPSE filed a complaint in the Tuscarawas County Court of Common Pleas to halt the use of replacement workers by the school district.

The judge did not reach a decision on April 5 and has ordered briefs to be filed in the coming weeks. We will keep you posted on progress!

OAPSE members of Local 390 at Claymont City Schools are standing strong and united after being forced off the job at midnight on March  21. The 84 strikers have been working without a contract for almost two years. They have been in mediation, trying to get a new contract. But management delivered an unacceptable last/best offer last week, and they had no choice but to strike.

Local 390 members are on the picket line for fairness in wages and insurance, among other issues. President Jim Maxwell and the 84 local union members were on the seven picket lines starting at midnight on March 21 and are determined to win justice for their members.

“We are on strike after working almost two years without a contract. This is about basic fairness and about showing management that we are serious about standing up for ourselves. We provide critical services to the students at Claymont City Schools, and we should have the decent wages and benefits that reflect that hard work and dedication,” Maxwell said.

They are thankful for the community support and solidarity. If you are in the Uhrichsville and Dennison areas, you can show your support in person with a honk and a wave. Strikers are standing in solidarity at two sites at the high school; and one site each at the intermediate school, middle school, and Eastport, Part and Trenton elementary schools.

If you are not a neighbor but want to show you stand with Local 390, leave a comment at our social media sites so Local 390 members know you are with them! The members of Local 390 are “Sticking with their Union!”