The seeds which grew into OAPSE/AFSCME were planted in 1934 as our nation suffered through what would be the worst economic depression in U.S. history. A small group of non-teaching public school employees, seeking a voice in their future retirement, organized the Ohio Non-Teaching School Employee Retirement Association. As a result of that organization’s work, the School Employee Retirement System (SERS) was created, granting those workers some measure of security in retirement.

Encouraged by their initial success, the pioneers brought about the incorporation of the Ohio Association of Public School Employees in 1941. The original charter was signed by three school custodians – Harry E. Johnson, A.L. Cochran, and C.L. Eichner. In its early years, OAPSE’s focus was on legislation and on the state budget, as it affected school districts and in turn the organization’s members. As the post-World War II years unfolded and as the nation’s economy moved into a period of prolonged industrial growth, OAPSE’s interests gradually shifted to the relationship between employees and their local school districts.

Even in the absence of a collective bargaining law for public employees in Ohio, the decade of the 60’s witnessed OAPSE’s expansion and the development of negotiation relationships between the union’s “Chapters” and Boards of Education. With no technical process for achieving recognition by individual school districts, the union sometimes engaged in job actions just to obtain the right to negotiate on behalf of its members. As the 1970’s unfolded, OAPSE came under the leadership of a former school custodian from the Canton area, Lawrence DeCresce, who would serve as Executive Director of the union for a decade-and-a-half. During that time, OAPSE contracts with school districts matured and the job rights, wages, and benefits of the union’s members expanded rapidly.

During that time, OAPSE also began to branch out into organizing workers in other jurisdictions besides its traditional classified school employee base. Soon, the union would claim members in Ohio’s agencies for the Developmentally Disabled (DD) and public libraries. While OAPSE became much more active in collective bargaining and politics during this era, it would not achieve financial stability or sustained growth until the union entered into its current modern period. 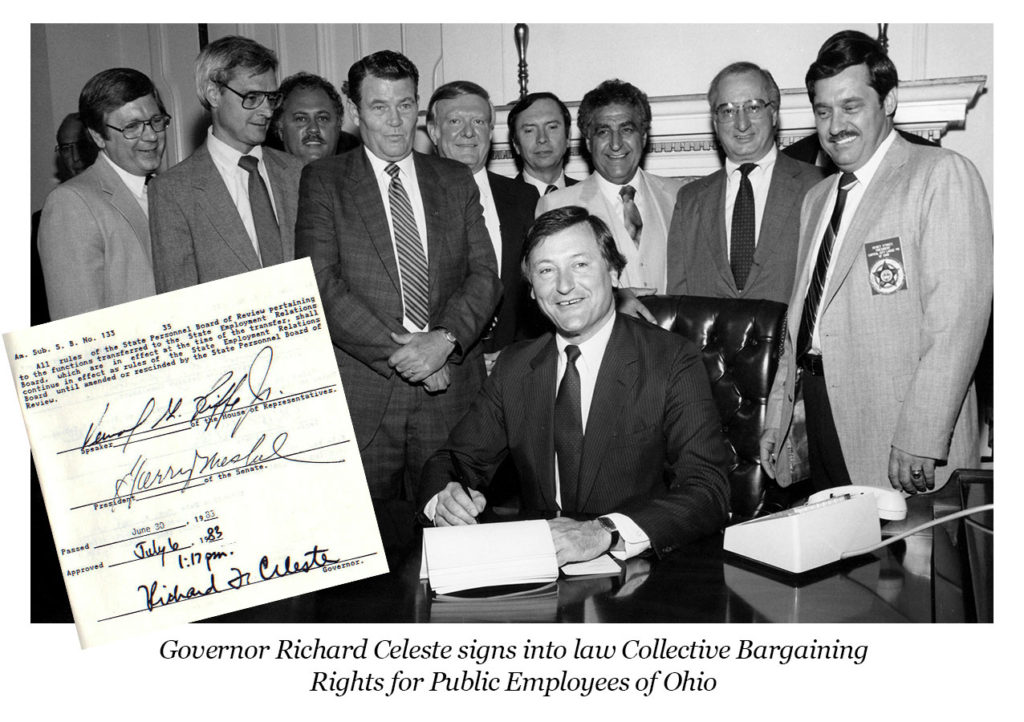 The mid 80’s also witnessed one of the most important developments in the history of the union. In 1983, a special convention of the union voted overwhelmingly to affiliate with the American Federation of State, County and Municipal Employees (AFSCME), the nation’s largest public employee union. Until that time, OAPSE had functioned as an independent association which held membership in the American Association of Classified School Employees. AACSE’s primary function was to coordinate lobbying informational programs in Washington, D.C. for the several state organizations which were members. The affiliation with AFSCME accelerated OAPSE’s evolution into a trade union and solidified its place in the labor movement. With the 1.6 million-member AFSCME behind it, OAPSE/AFSCME’s advocacy for its members took on a new credibility.

In the mid 1980’s, a school custodian from the Girard City Schools near Youngstown, JoAnn Johntony, ascended to the elected Presidency of the union. In 1988, Johntony oversaw dramatic changes in the union which culminated in the Executive Board’s selection of staff member Joseph P. Rugola to serve as Executive Director. Rugola undertook a series of reforms and initiatives which altered OAPSE/AFSCME’s way of doing business and representing its members. More aggressive and professional standards of representation were incorporated into the union, new programs and services were introduced, and organizing new members took on a greater importance in OAPSE.

During the 1990’s, the union faced serious threats from private companies seeking contracts from school boards to provide services traditionally performed by OAPSE/AFSCME members. At the same time, OAPSE/AFSCME and every other education organization in the state were embroiled in a decade-long fight over the inadequacy of school funding and the crisis it created in the public schools. OAPSE/AFSCME has fought fiercely and successfully on both fronts at the same time that its organizing successes began to mount. Political and legislative programs were improved by the adoption of a more aggressive approach toward electing public officials at every level of government who support the interests of our members.

All of these factors came together in the second half of the 1990’s and OAPSE/AFSCME began a period of rapid growth in its membership base and influence. Thousands of employees of Ohio’s public schools, Head Starts, DD’s, public libraries, and other jurisdictions chose OAPSE/AFSCME to represent them. Since 1999 alone, 7,000 workers have been added to OAPSE/AFSCME’s ranks, pushing total membership to over 34,000. During the fifteen years of the current administration of the union, membership has increased by a total of 12,000. OAPSE/AFSCME now stands as the strongest voice by far for workers in education-related institutions in Ohio.