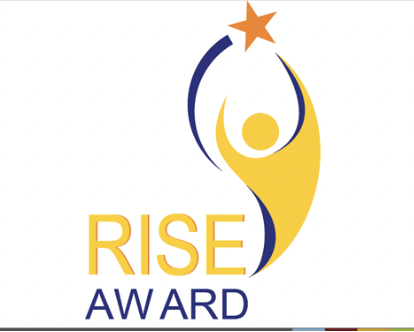 OAPSE members can be proud today (and every day) about the important work they do to educate Ohio students.

Today, that critical work was recognized for two OAPSE members who significantly impact their schools and their communities.

Bev and Kristy will join finalists from across the country as the U.S. Department of Education selects a winner for the national RISE Award in April 2024.

The Recognizing Inspirational School Employees (RISE) Award was created by Congress in 2019 and is overseen by the U.S. Department of Education.  This award honors classified school employees who provide exemplary service to their school communities.

Bev and Kristy certainly do that!

Kristy joined the Wickliffe staff in 2017. She was nominated by her principal at the high school for her actions that promote a caring environment in the district. Principal Shyla Urban said of Kristy:

She is extremely involved in the school and community on a variety of levels. She has helped to create a successful “Back to School Bash” where low-income students can collect school supplies, food, school clothing, and haircuts before the first day of school. As a certified cosmetologist, she has rallied other community members to get together to offer free haircuts to kids who cannot afford one. She also has started an initiative called Kindland, connecting our school and community by spreading Kindness throughout.

Mrs. Adams is a leader among our students, staff, and parents by not only creating a culture of Kindness, but she has also helped to develop a course that gives students a platform to discuss difficult topics such as racism, sexism, homophobia, transgender, among many others. From these conversations, the course has created Community Circles where they invite the rest of the students and staff to participate in activities to bring these topics to light. She is the person who students turn to when they need someone to talk to because they know they can trust her. She cares about kids! She is a change agent. She is BEYOND valuable at Wickliffe High School.

Kristy is also the assistant girls’ soccer coach at Wickliffe High School and was named Assistant Coach of the Year this fall by the Greater Cleveland Scholastic Soccer Coaches Association.

Bev joined Crestline Village Local Schools nearly 39 years ago and is THE go-to person in the school district to find answers, assistance and direction.

A leader in OAPSE, Bev was nominated by State President Lois Carson. Bev is the OAPSE executive board member from North Central District and is district treasurer. She has served the members of Local 416 in many roles and is often the person union members rely on for expertise and information.

Bev received letters of recommendation from the district superintendent, her elementary principal and Crestline’s mayor. In addition, many village leaders offered testimonials on Bev’s work in the community.

She began her career substituting as an aide and a bus driver. She followed that with time as a study hall monitor and an in-school suspension aide. But, for most of her nearly four decades in service to Crestline children and families, she has worked as a secretary. Currently, Bev works as an elementary school secretary, where she also is responsible for the preschool and the transportation secretarial duties. Bev really is the “center of the wheel” in her school and district. “Mama Payne” is the one her co-workers come to for help, advice and direction. She assists parents who call with questions about bus routes, teachers, schedules and everything related to Crestline Schools. And her experience with all facets of the school system – including relationships built over a lifetime of living and working in Crestline – makes her an exceptional team member who administrators rely on to make the district the best it can be.

When Bev sees a need or a challenge, she takes charge and meets it. Her no-nonsense approach to problem solving earned her the title of “Sergeant Payne” in Crestline, where she helps lead the annual Harvest Festival and where she serves as an elected member of Village Council. Bev partners with community leaders of all political persuasions to make life better for families in the village she has called home all her life. She doesn’t believe in complaining. She believes in taking action toward improvement. And she unites people to get the job done!

Bev is beloved in Crestline because she is a kind, compassionate, tireless giver of her time, energy and love to students, families and neighbors. She is simply the best.

OAPSE is proud of Kristy and Bev.