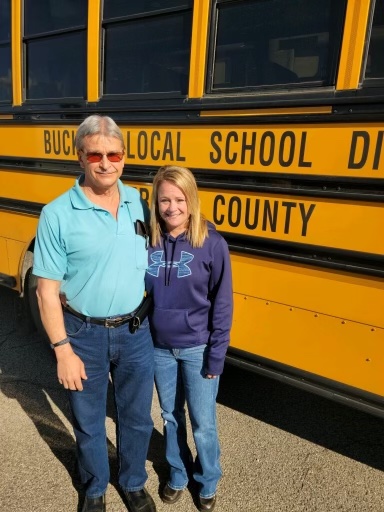 Carri Justice has been driving a bus for Buckeye Local Schools for 21 years. She was trained by OAPSE Local 373 leader John Sindeldecker, pictured here with Carri. Her training and experience made all the difference when her bus full of junior high and high school students was hit by a flatbed truck. She was able to move her bus off the road just enough to avoid a head-on collision. Carri and her kids are all ok, and so is the truck driver – also a student at Buckeye Local Schools. Since the crash, she has worked to comfort students and families and met every bus at the elementary school to speak with students about the accident and how they should know riding the bus is safe. John is really proud of Carri and so are we! You can read more about Carri below. She’s a great example of how OAPSE members go the extra mile for those we serve!

As school bus driver Carri Justice was reaching the top of a knoll on her morning route, she saw a flatbed truck coming straight at her and the junior high and high school students she was driving.
The 21-year driver and member of Local 373 at Buckeye Local Schools in eastern Ohio said she knew, “if I don’t take this bus off the road a little, he’s going to hit me head on. I just tried to stay calm and keep my kids out of harm’s way as much as possible.”

Carri moved the bus onto the berm just enough to avoid a complete head-on collision – and just enough to keep herself and her students from serious injuries.
“It all happened so fast. It’s like watching a movie in my head when I think about it now. I saw the truck swerve to miss a van that was on the side of the road with a flat tire. He was trying to stop. I was trying to stop. But the roads were slick, and he hit me. I’m just relieved and thankful no one was seriously injured – or worse,” she said.

When the bus came to a stop, Carri made sure she was ok and then “immediately went into ‘mom mode.’ All my training and my 21 years of driving and my being a mom came together, and I just focused on the kids. They may not be blood, but they’re mine just the same, and I knew I had to make sure they were all ok.”

Carri first called the bus garage to have them request ambulances for the driver and students. She then checked on every student on the bus and assured them that they were ok and that help was on the way. Carri then checked on the driver of the truck.
“He’s only 17 years old, and he’s a student at our high school. He saw that van on the shoulder of the road, and he overcompensated trying to avoid it and came right at us instead. But it was an accident. He just couldn’t control the flatbed truck on a slick road.” Carri said.

The driver was life-flighted to a Pittsburgh trauma center, but is home and recovering from broken ribs and other injuries. He is expected to make a full recovery. Ten of the riders on Carri’s bus were transported to a local hospital with concussions and other injuries. They have been released and are all doing well.
“I called every student to check on them and talk to their parents. I really do consider myself responsible for them like they are my own, so I wanted to make sure they were ok,” Carri said.

OAPSE State Executive Board Alternate John Sindeldecker is also a bus driver at Buckeye Local Schools and a member of Local 373. He trained Carri for the job 21 years ago, and said he couldn’t be more proud of how she responded to the toughest day she has ever had behind the wheel of her school bus.

“Carri did everything right. She made sure her kids were good and she kept them from panicking. She called emergency. She checked on the driver of the truck. And she didn’t leave the scene of the accident until all the kids and parents were gone and her bus was towed away. She’s just a perfect role model for what you want in a school bus driver.”

“We are all really proud of her for being such a professional. And I know the parents are thankful for the care she showed their kids – not just the day of the crash, but every day,” he said.

Carri said she has always been a cautious driver and she carries a reminder of how important safety is in her job. On her gear shift hangs a gift from her boyfriend — an angel with the words, “Never drive faster than your guardian angel can fly!”
“So every morning before I pull out of the lot, I grab it and say, ‘Lord please watch after my daughter Tristyn, my son Kaden & and (my boyfriend) Daniel. Watch over my family and his. Please make sure I get these kids to school and back home safely.’ Well that morning we may not have made it to the school, but we all made it home to our families. All of us. Even the young man in the truck. So my angel was there with us that day!” 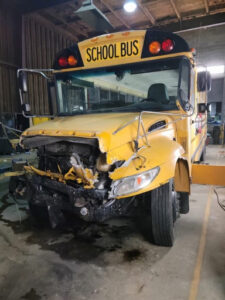