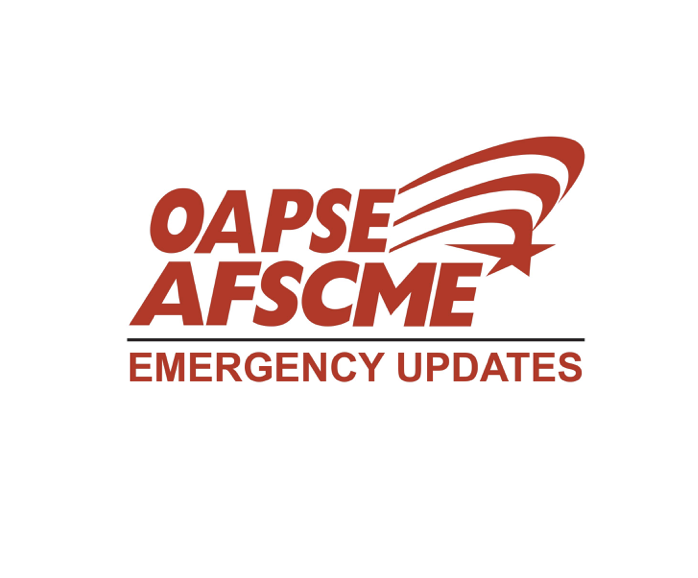 Summer is over, and schools all over Ohio are reopening – in one form or another. Some school districts have opted to do online-only learning. Some are using a hybrid system of virtual and in-person instruction. And still others decided to bring everyone back into school buildings for the start of this academic year.

No matter how you are going back to school, your union has been fighting to keep you safe on the job and to continue your pay and benefits through the COVID-19 health emergency.

In most cases, OAPSE members are working or are being paid. Our regional directors and field representatives have been meeting with union leaders and management all across Ohio to figure out the best result for the districts and for the employees who provide critical services to students and families. The bottom line is that all of our members want to be working. But if they cannot work because of a calamity such as COVID-19, their pay and benefits should be continued.

Most employers have agreed with us about that and most are working with us to safely transition our members back to work – whenever that happens in their districts.

Unfortunately, we have some notable exceptions – mean-spirited superintendents and school board members who have laid off or furloughed employees instead of finding creative solutions to keep them on the payroll.

Superintendent Hal Gregory and School Board President Carol Molnar at Oregon City Schools near Toledo have been particularly hostile in their actions toward members of OAPSE Local 320. They laid off 122 bus drivers, librarians, paraprofessionals, monitors and food service workers. Initially, they stripped these employees of their insurance, even though premiums had been paid. When the union launched a public awareness campaign and unleashed radio ads, social media posts and robocalls to tell the real story of their heartless and cruel actions, the district backtracked. Their revised plan paid workers for one day per week but increased their insurance premiums to almost $1,500.

OAPSE applied more public pressure, and the district reinstated insurance at the old rates – a big victory for the 122 laid off employees.

But OAPSE is not stopping there. The union’s legal team is ready to file a lawsuit if the employees are not recalled from the layoff. Several grievances and unfair labor practice (ULP) charges are ready to be filed as well. And we will do whatever it takes to get justice for these members of Local 320 – and for any OAPSE member who is treated unjustly.

Perhaps the worst part of this situation is that it didn’t have to be this way. The superintendent and board president wanted it this way.

The district is financially sound, so these layoffs are not for lack of funds. The union tried to negotiate several other scenarios, including the state’s Shared Work program, which would have kept Local 320 members on the job and tied to their insurance benefits. The employer’s answer was that it was too much trouble to figure out the program and implement it.

To make matters worse, the district isn’t really even going to save money through the layoffs because they must pay unemployment costs. Superintendent Gregory and Board President Molnar are just punishing workers because they want to.

This situation is happening in Oregon – but other employers can and have tried similar actions. Be on the lookout for these kinds of despicable acts, and alert your field representative immediately. And know that OAPSE will be there, ready to fight with and for you.